Catholic Health Initiatives and Dignity Health have signed a definitive agreement to combine their ministries to create the largest Catholic health system in the nation, based on projected combined revenues. The organizations, which operate primarily in the Midwest and Western United States, said they expect to complete the transaction in the second half of this year. 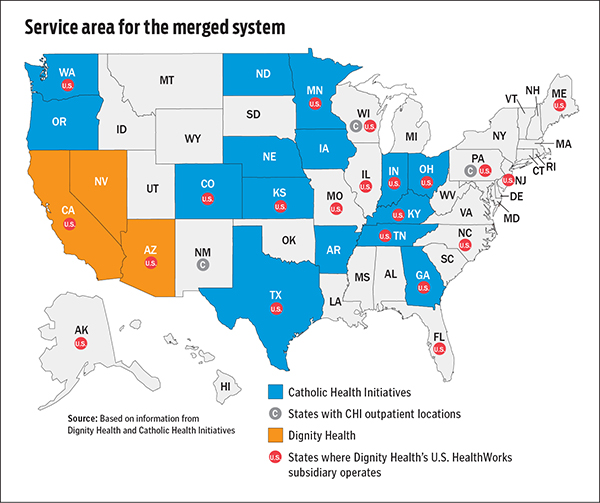 The combined system would have more than $28 billion in operating revenues, more than 700 care sites, about 159,000 employees and more than 25,000 physicians and other advanced practitioners.
Within days of the Dec. 7 announcement of the CHI and Dignity Health final agreement, The Wall Street Journal reported that the two largest Catholic health systems in the country — St. Louis-based Ascension and Renton, Wash.-based Providence St. Joseph Health — are in talks that could lead to a merger or combination. Combined, those systems would generate approximately $45 billion in annual revenue. A spokesperson for Providence St. Joseph declined comment on the report, and Ascension did not respond to an inquiry seeking comment.
CHI and Dignity Health said combining their organizations will give them a stronger operational and financial foundation and a larger footprint. There is no overlap in the two systems’ hospital service areas, although in 12 states, there is some overlap between CHI’s hospital or non-acute service areas and areas where Dignity Health provides non-acute services. A Dignity Health spokesperson said Dignity Health’s U.S. HealthWorks subsidiary operates occupational health and urgent care centers in 21 states.
CHI and Dignity Health said they do not expect any changes to frontline staff as a result of the merger, nor do they anticipate service disruption for patients.
Balance sheet
Both CHI and Dignity Health had operating losses that were offset by investment income and gains in fiscal year 2017. CHI, with $15.5 billion in total operating revenue, had an operating loss of $585 million and total revenue over expenses of $108 million. Dignity Health, with $12.9 billion in total operating revenue, had an operating loss of about $67 million and total revenue over expenses of $384 million.
“There is no doubt that health care will only be more challenging in the future, particularly for organizations that are committed to caring for vulnerable populations,” CHI and Dignity Health said.
The systems said the merged company will be in a more competitive position, with the resources to expand access to quality care, build upon existing capabilities and accelerate improvements in care delivery. “The new organization will have the size and ability to scale best-in-class service lines; recruit and retain top talent; standardize operations to improve quality and reduce the cost of care; and advocate more effectively for all people, especially those who are poor and vulnerable,” the systems said in response to questions from Catholic Health World. 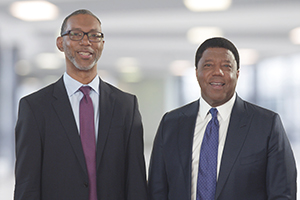 Kevin E. Lofton, left, chief executive of Catholic Health Initiatives, and Lloyd Dean, president and chief executive of Dignity Health.
Plans call for the new company to be a Catholic nonprofit with its headquarters in Chicago, a city Englewood, Colo.-based CHI and San Francisco-based Dignity Health said they selected for its central location and convenient access to all their locations. The systems said there currently are no plans to merge with an additional health system in the Midwest.
Governance
The organization will have an Office of the CEO, with Lloyd Dean and Kevin Lofton both serving as chief executives of the new system. They will jointly oversee strategy and integration planning for the new system. In addition, Lofton, who is chief executive of CHI, will have authority for the new organization’s mission, advocacy, sponsorship and governance; system partnerships and information technology. Dean, who is president and chief executive of Dignity Health, will have authority for all of operations, including clinical, financial and human resources functions. They will work side-by-side with an executive team to plan the integration of the two systems.
The combined organization will create a 14-member governing board called the Board of Stewardship Trustees comprised of the two chief executives and six members from each legacy board.
Members of the new governing board will serve as both sponsors of the canonical — or church corporation, Catholic Health Care Federation — and the civil corporation. Catholic Health Care Federation, a public juridic person, is the current sponsor of CHI.
The organizations plan to announce the combined system’s name in the second half of this year. They said the names of existing facilities and services will not change. The deal is subject to federal, state and Catholic Church approval.
The combined organization would represent 18 legacy congregations of women religious. CHI and Dignity Health have two of those legacy congregations in common.
Dignity is comprised of 24 Catholic and 15 other-than-Catholic hospitals. CHI has 101 hospitals. Eight of its facilities are other-than-Catholic. The other-than-Catholic facilities of both legacy organizations will remain non-Catholic. The non-Catholic facilities will continue to operate under the Statement of Common Values and in alignment with the combined ministry’s mission and values, the systems said.
Accelerating change
Lofton said in a news release that the combined system will “accelerate the change from sick-care to well-care.” Dean said the new system “will expand our commitment to meeting the needs of all people with compassion, regardless of income, ethnicity or language.”
Plans call for the new system to focus on expanding community-based care, including outpatient and virtual care; bolster clinical programs including those for people with chronic illness; and advance digital technologies and innovations. These innovations include stroke robots — or telehealth systems that allow physicians to diagnose stroke victims remotely, often in rural areas, so patients’ treatment can begin as soon as possible; and the use of Google Glass digital eyewear. That eyewear allows a doctor to view and enter information into the patient’s electronic medical record and to access other informational resources while keeping focused on the patient in clinical settings.
The systems said they will continue to support the communities they serve through charity care, grants and loans and other community benefit activities. They do not anticipate any immediate changes to their philanthropic foundations or the focus areas of those foundations as a result of the combination.
CHI and Dignity Health said the new company will aim to become a “national platform for innovation and research,” building on past successes in telehealth, micro-hospital development and precision medicine.
In September 2016, CHI and Dignity Health formed Precision Medicine Alliance, and said they plan to create the largest community-based precision medicine program in the country. Precision medicine is an emerging clinical science that takes into account the individual variability of genes and other factors to target therapies for maximum effectiveness.
Growth through mergers
CHI operates acute care facilities in 15 states and in three additional states it operates only non-acute care facilities. Its portfolio includes two academic medical centers. Its facilities are in the Northeast, South, Midwest and Northwest. CHI was formed in 1996 through the merger of four Catholic health systems. Fourteen congregations of women religious either founded or later joined their ministries with CHI. According to CHI, each congregation has influence on CHI’s public juridic person.
Dignity Health has a presence in 22 states. It operates hospitals in California, Arizona and Nevada. Dignity Health began in 1986 when the ministries of two Sisters of Mercy congregations combined to form Catholic Healthcare West. In time, the ministries of four additional sponsoring congregations joined the organization. In 2012, the organization changed its name to “Dignity Health” and restructured its governance so that the parent corporation no longer is an official ministry of the Catholic Church.
Mission, vision and values
Dignity Health currently has a sponsorship council. It oversees the Catholic identity of the health system’s Catholic facilities. The council would be discontinued once the merger with CHI is finalized.
The sponsorship council is comprised of a member from each of the founding congregations that first opened each Catholic hospital, now owned by Dignity Health. Each of these hospitals is essentially sponsored directly by its founding congregations, through the council. Three sister sponsor representatives from the sponsorship council also sit on the Mission Integrity Committee of Dignity Health’s board. This committee oversees — and reports to the board — on mission and values for the entire organization.
CHI and Dignity Health said the organizations will undergo a discernment process to identify the mission, vision and values of the combined system. The systems added, “We are fortunate that Dignity Health’s and Catholic Health Initiatives’ mission and vision statements, as well as their core values, are already very similar.
‹ Next News Previous News ›